Canada from an american

That Tom Brokaw "Introduction to Canada" video? See it now, while you can.

NBC may release a commemorative DVD of the network's Olympic coverage at some point, or it may not. Either way, there's no guarantee that Tom Brokaw's fine visual essay of Canada — a kind of "introduction to Canada" for viewers in the U.S. who may not know Canada from Carolina — will be on it. (CTV already has a commemorative DVD in the works. You can preorder it from CTV directly, or on iTunes, but it definitely won't include the Brokaw video.)

Many of NBC's TV programs turn up on Hulu, the complimentary — i.e. free — video site that NBC owns in part, but Hulu isn't accessible from Canada.

The Brokaw segment has shown up on YouTube, though, and it's worth seeing, even though it's nowhere near as effective when not seen in HD.

Grainy or not, you'd better watch it now, before it disappears again — possibly for good, this time.

It really is worth seeing, if you haven't already. Brokaw lends a certain gravitas and dignity that is sorely lacking in most Olympic TV coverage — on both sides of the border.

Labels: Canada, US of A

From my inbox, come this email from a friend. jnh

I might be wrong about a generational shift, but is our basic view of reality changing? For example, we might see a documentary on the founding of the country. In comparison, little children watching a like account in animated fiction see it as just as real. Here we are today as the big story about the foundations for life is the same, yet so many in another world seem to have no idea about reality.

Irene was switching channels and stopped a moment, just shocked as a lady’s hair and eyes looked more like the Cocker Spaniel from 101 Dalmatians than a woman’s, except a dog would never have that color. So how did she become the female representative of the largest “Christian” TV network in the world? We never see that level of weirdness in the soaps, and it goes beyond those kids on MTV! To emphasize living in the Spirit, okay, just let's start with the "spirit of discernment!" What is that shallow immaturity and baby talk as a testimony representing Almighty God in His holiness? We are so ashamed!!! Who are these while assuming to be our representatives for God before the world? Supporting that? People may have problems properly dividing the Word of Truth, but anyone with common sense can read a life! And while a lot of people seeing Benny Hinn can see through the veneer, a world out there like animated fiction think he is real.

ORANGE, Calif. — The wife of televangelist Benny Hinn has filed for divorce in Southern California.

The couple has been married for more than 30 years.

Hinn operates a church and television studio in Aliso Viejo.

He is one of six televangelists under investigation by Republican Sen. Charles Grassley of Iowa.

Grassley sent letters to six Christian ministries, including Hinn's, in 2007 asking about spending on private planes, oceanside mansions, board oversight and involvement in for-profit businesses.

The ministries have denied wrongdoing.

Thanks CB
Posted by Bro. Jeff Hallmark at 8:03 AM 2 comments:

Some 100,000 John and Romans given out to the crowds of people from all over the world.

2010 is special for Canada & BC.
Knowing you would like to be here or have not always the time to visit or get around with all this trafic...here is a special viewing for us all.
Have a good day; yours to see.

Thanks to the Coates family for the link.
Posted by Bro. Jeff Hallmark at 9:50 AM 1 comment:

Quoting a Quote by Ronald Reagan

Thomas Jefferson once said, 'We should never judge a president by his age, only by his works.' And ever since he told me that, I stopped worrying.

THE 39 CHARACTERISTICS OF THE PHARISEES

15. They aggressively pursue and provoke the servants of God. (Luke 11:53)

16. They ridicule converts with charges of incredulity and deception. (John 7:47)

17. They bring consensuses of the notables against dissenting views. (John 7:48)

23. They are unable to mentally separate internals from externals. (Acts 15:5)

28. They are covetous and seek to have preeminence at the expense and derision of others. (Luke 16:14)

34. They heap praise on their denominational fathers, who had no
resemblance to them (Matt. 23:29)

37. They are on arrogant, reviling, unteachable, self righteous, and spiritually blind bunch. (John 9:28-34)

38. They love to bring up a convert’s or dissenter’s (from their program) past to intimidate them, employing threats and reprisal on them. (John 9:34-35)

The Baptist History Preservation Society currently has four Baptist history prints available for purchase. These prints picture scenes from our Baptist history and heritage. They were painted by nationally known artist, Don Adair, of Richardson, Texas. Many churches have purchased them to place in their fellowship halls, foyers, Sunday School rooms, and pastor's study. Be sure and go to the below link to view each print. The prints are pictured at: http://www.baptisthistorypreservation.com/content/baptist-prints.htm
As With Roses: The painting depicts the beating of the Baptist preacher, Obadiah Holmes, in Boston, September 5, 1651.
From This Sion: Depicted is the constituting service of the Sandy Creek Baptist Church, November 22, 1755. Shown preaching is Shubal Stearns.
Never To Be Forgotten: A scene from the life of Isaac McCoy, missionary to the American Indians. While returning home, Isaac received news of the death of his eldest son (the seventh to die on the mission field). He described the reunion on this sad occasion as a "meeting never to be forgotten".
A Lively Experiment: Depicted is John Clarke receiving the Royal Charter of 1663. Clarke had procured the charter for the Rhode Island colony from King Charles II as a protection of religious liberty.
The Baptist History Preservation Society
http://www.baptisthistorypreservation.com/
640 Rimertown Rd., Rockwell, NC 28138

Fighting Terrorism prior to WW I - General Pershing

I have said a number of times, if they could put pigs on airplanes there would be no terrorist attacks by Muslims. And here is one story to verify my thoughts. 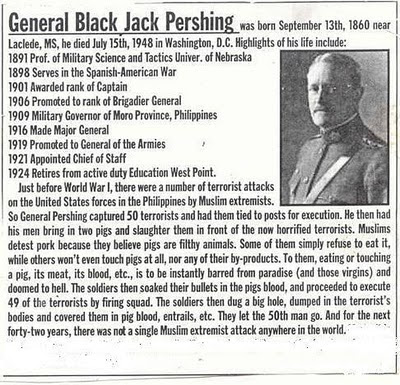 TW is far from being a conservative university, however they are under attack of this world system. jnh

A dispute has erupted between the country’s largest association of university teachers and a group of Christian schools, raising questions over whether academic freedom can exist in an overtly religious environment.

The Canadian Association of University Teachers (CAUT) has issued a report that says B.C.-based Trinity Western University falls below the standard of proper academic freedom because it requires its faculty sign a statement of Christian faith before being hired.

It has also put the organization “on a list of institutions found to have imposed a requirement of a commitment to a particular ideology or statement as condition of employment.”

The statement of faith, available on the school’s web site, acknowledges, among other things, that there is one God, the Bible is the inspired Word of God, and that Christ is God incarnate.

The report by the teachers’ body also pointed to excerpts from the academic calendar, which in part said: “All teaching, learning, thinking, and scholarship take place under the direction of the Bible.”

Although Trinity Western is the first school to be put on the list, the organization said it will now investigate three other Christian universities — Crandall University in Moncton, Canadian Mennonite University in Winnipeg, and Redeemer University College in Ancaster, Ont. — all of which require faculty to sign faith statements.

“A school that requires its faculty to subscribe to a particular religious belief or ideology cannot be practicing academic freedom,” said James Turk, executive director of CAUT. “This is not about the school being Christian, but about faculty having to sign a statement of faith before being hired. A university is meant as a place to explore ideas, not to create disciples of Christ.”

I do not have all the answers but I have come concerns. Maybe there was a lapse in judgment, but what was the real motivation of our brothers and sisters trying to rescue the orphans who Jesus loves? Are there not precious people in that group: the trusting girl, a caring housewife, a good ol' boy who just shows up being ready to help?

God weighs in for His own powerful prayer request. "Remember them that are in bonds, as bound with them; and them which suffer adversity, as being yourselves also in the body” (Hebrews 13:3). But I do not believe that many over here are praying, do you?

Considering the increasing "ANTI"-Christ direction in America (not "the" Antichrist) and if my life is long, not only is there potential for going to prison, I plan to be there. This nation is on a rocketing collision course against the Bible and our instructions are to find out where Jesus Christ stands on any subject and then to go and stand there with Him, graciously, but do stand.

My concern is: Would you rather be in a Russian prison or an American prison? Ten American believers were captured and I do not believe many from the American church are praying, but the Russians would. Our emails are busy with everything else and Facebook is mostly just more fun. This silence testifies of our indifference.

If Haiti really wants more help they need to smarten up! That church's track record is: New Orleans relief, the floods of Texas, and the ice storms in Oklahoma while going all the way down there to meet lots of needs. And then like a swat team for God, they showed up to save lives in Haiti, not with time for great preparation to know what to do in every situation - but they were there! Commendable! When that government was too busy and with kids on the edge, they tried for quick safety. And their track record is not about drugs, abuse, or child trafficking etc, it's just a godly Christian church and with a lot of compassion.

Imprisoned and with life running out, the Apostle Paul asked for Mark - social need, the cloke - physical need, the books - intellectual need, and the parchments - spiritual need (2 Timothy 4:11-13). We must not storm jails; we are to storm heaven! Acts 12:5 says, "Peter therefore was kept in prison: but prayer was made without ceasing of the church unto God for him." Could Paul have counted on us to care? Could Peter have counted on us to pray?

I suspect that if trouble is coming to America, many Christians will simply trust the authorities to work it out, just believe the media spin, or just to forget it. So if that is you or me behind those bars, then friend the future is beginning to sound mighty lonely. 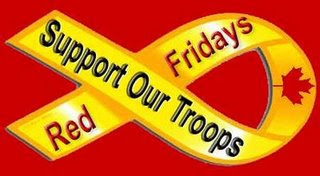 Posted by Bro. Jeff Hallmark at 9:45 AM No comments:

The lighting, the backgrounds, the details, even down to the rain on the street and the snow scenes! I didn't believe they were models for the first few pictures. Wonder if this is a hobby for this guy or if he works in the film industry or something.

When you watch this remember that these are all models, no real cars.

Catching up on somethings on BP

Greetings from the TRUE NORTH STRONG AND FREE... Canada

I have been very busy since the first of the year. With a couple's conference, year end, driver training (btw I passed my test and now have my 'class 2' drivers licence) etc..

Spruceland Baptist brought a mini-bus in which Bro. Mike is our driver, but now we have a backup driver, ME!!!


This is a personal post, I have placed a number of labels below you can check out some of BP past postings.

Have a great day,

Posted by Bro. Jeff Hallmark at 7:46 AM No comments: