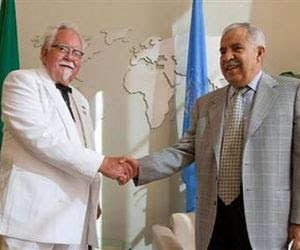 (Newser) – A Colonel Sanders lookalike got a diplomat’s welcome at the United Nations, somehow tricking the security guards into letting him in, UN officials sheepishly admitted. Once inside, the KFC mascot met with UN General Assembly President Ali Treki of Libya, even getting his picture snapped shaking hands beneath the assembly’s giant logo. “I wouldn’t call that a meeting,” objected a Treki spokesman. “No appointment (was) scheduled with the actor impersonating Colonel Sanders.”

“It should not have happened,” said a Ban Ki-Moon spokeswoman, warning that the UN could take legal action against the chicken joint. The stunt was designed to promote KFC’s new grilled chicken offerings. The company’s president also sent a letter to Ban, asking him to recognize the “Grilled Nation” of chicken eaters as a UN member. “That letter is absolutely void to us,” said the spokeswoman. “It has no meaning whatsoever.”

We know that there are a lot of impersonator in churches to day as well. BUT one thing for sure there will be NO impersonators in HEAVEN.