Here we see "hero worship" of a men whose teaching has 'damned' millions of souls to HELL.

Why would any true Baptist promote a man who proclaimed "infant baptism"?

Answer: a true Baptist would NOT!!!!!


That is my question, and my answer, care to comment?

The most significant controversy to centre upon the sacrament of baptism has arguably been the debate over whether it is legitimate to baptize infants or not(McGrath 443). In his most renowned work, Institutes of the Christian Religion, John Calvin takes up this issue endeavouring to prove that infant baptism is a divine institution(Wendel 324). Calvin declares that "infants cannot be deprived of it[baptism] without open violation of the will of God"(Inst.4, 16, 8). He reasons this primarily through paralleling circumcision and baptism, asserting that Scripture testifies to the fact that baptism is for the Christians what circumcision was previously for the Jews(Inst.4, 16, 11). This essay will undertake the task of manifesting the coherence, profundity, and thoroughness of Calvin's reasoning, while illuminating the congruence of his arguments with Scripture. 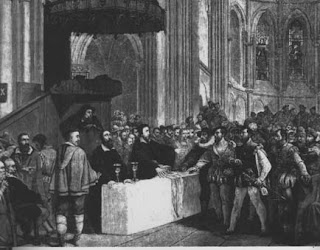 ... an interesting and authoritative 16th Century Protestant affirmation of the intrinsic meaning and effect of the sacraments, which attributes their detraction to, well, Satan. It is a byword in the Catholic historical perspective that while Luther clung to Catholic sacramentality, Calvin clung to Catholic soteriology... thus neither were really able to depart that far from the faith of the apostles.

"No sound man, I presume, can now doubt how rashly the Church is disturbed by those who excite quarrels and disturbances because of infant baptism. For it is of importance to observe what Satan means by all this craft, viz., to rob us of the singular blessing of confidence and spiritual joy, which is hence to be derived, and in so far to detract from the glory of the divine goodness. For how sweet is it to pious minds to be assured not only by word, but even by ocular demonstration, that they are so much in favour with their heavenly Father, that he interests himself in their posterity! Here we may see how he acts towards us as a most provident parent, not ceasing to care for us even after our death, but consulting and providing for our children. Ought not our whole heart to be stirred up within us, as David's was, (Ps. 48: 11,) to bless his name for such a manifestation of goodness? Doubtless, the design of Satan in assaulting infant baptism with all his forces is to keep out of view, and gradually efface, that attestation of divine grace which the promise itself presents to our eyes. In this way, not only would men be impiously ungrateful for the mercy of God, but be less careful in training their children to piety. For it is no slight stimulus to us to bring them up in the fear of God, and the observance of his law, when we reflect, that from their birth they have been considered and acknowledged by him as his children. Wherefore, if we would not maliciously obscure the kindness of God, let us present to him our infants, to whom he has assigned a place among his friends and family that is, the members of the Church.

Institutes of the Christian Religion, 4:16.32 on Infant baptism