When the USA Flag is upside down it is a 'distress signal'. So here is just one of many 'changes' coming to the good ole US of A. 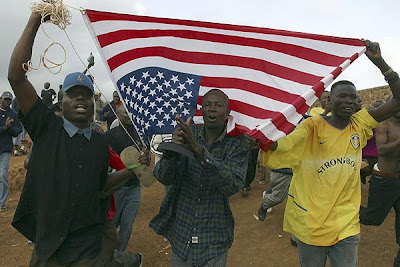 People carry an U.S. flag as they celebrate U.S. President-elect Senator Barack Obama's historic White House victory in Nairobi's Kibera slum on Wednesday. Kenyans in Obama's ancestral homeland sang and danced with joy on Wednesday as the Illinois senator they see as one of their own became the first black U.S. president. Photo/REUTERS

Labels: US of A